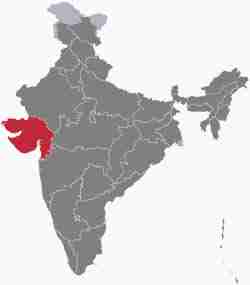 Gujarat is India’s sixth largest state in terms of area and ninth most populous state with a population of over 60 million. It is one of the prosperous and efficiently governed states in India and a frontrunner state in the energy sector in India. It is a state where 24 hours electricity is available in both villages and cities.

In the renewable energy (RE) sector too, the state is forging ahead of other states. This state located in western India contributes 13 per cent to India’s renewable portfolio, contributing over 10 GW of renewable capacity for the country. It is also the leading state in solar rooftop installations in the country. Last but not the least, almost 37 per cent of the total energy capacity in Gujarat comes from renewables.

The state is increasingly relying on renewable capacity to meet its electricity needs. Its total installed power generation capacity from renewable energy sources – solar, wind, hydel, biomass and bagasse, is about 13,152 MW as of June 2021. Of this, over 70 per cent is contributed by wind. Gujarat’s stellar position is thanks to progressive policies replete with incentives, investor friendly approach, effective governance and implementation as well as a planned approach. Besides having a good RE potential and an attractive policy environment, the state provides concessional benefits, has good evacuation systems and has a transparent e-bidding process.

The state has many firsts to its credit including the announcement of a 30 GW solar-wind hybrid park on a waste land. With its ambitious target to reach over 15,000 MW by 2022 and over 60,000 MW by 2030, the state holds the promise for a lot of action in renewable energy in the coming years.

The State undertook structural reforms wherein the erstwhile Gujarat Electricity Board (GEB) was unbundled on 1st April 2005 into separate companies. These include Gujarat State Electricity Corporation Limited (GSECL) for generation, Gujarat Energy Transmission and four state discoms for distribution. GSECL owns an installed capacity of 6.8 GW, with four-coal based plants two gas and two lignite plants and two hydro plants, along with 10 MW of wind and 89 MW of solar projects.

GSECL owns an installed capacity of 6.8 GW, with four-coal based plants two gas and two lignite plants and two hydro plants, along with 10 MW of wind and 89 MW of solar projects.

A part of the reforms, Gujarat Electricity Regulatory Commission was also formed to regulate the state electricity sector. Some of the main policies in the state include:

The state is using multiple routes for RE capacity addition. One way is through competitive bidding while another way is through rooftop solar. Besides, state government initiatives including developing solar projects near GETCO substations, state government schemes such as Suryashakti Kisan Yojana and solarisation of the Modhera sun temple and development of Gandhinagar as a solar city are other ways of adding RE capacity.

Several new mega projects are being implemented across the state to boost renewable electricity generation. The foundation stone for a 30,000 MW hybrid (solar and wind) renewable energy park in Kutch, claimed to be the world’s largest of its kind, was laid by Prime Minister Narendra Modi last year in December. The park, spread across 72,600 hectares, is even larger than some Indian cities. The project is estimated to attract an investment of Rs 1.5 trillion. Since it is along the India-Pakistan border, border security is also likely to increase with windmills along the border. The park will help reduce per capita carbon emissions in India and provide huge employment opportunities.

Besides, four power distribution companies, affiliated with the state-run Gujarat Urja Vikas Nigam Ltd (GUVNL), recently signed power-purchase agreements (PPAs) for 3,979 small-scale solar power projects (0.5-4 MW) with a total generation capacity of 2,500 MW. Expected to be commissioned within the next 18 months, these projects will bring an investment worth Rs 100 billion in sectors associated with green energy.

Many new RE projects are coming up under competitive bidding both in wind and solar. These include ultra-mega solar parks and non-parks. Solar energy parks are being developed at Dholera near Ahmedabad, and Raghanesda and Harshad in Banaskantha. Gujarat is also working on a slew of other solar and wind energy projects auctioned by the Solar Energy Corporation of India.

India’s leading business house Reliance Industries Limited (RIL) has announced its big time entry in the RE sector, in generation as well as equipment manufacturing. The company claims that by 2030, it will establish 100 GW of solar energy in India. A 5,000-acre Dhirubhai Ambani Green Energy Giga Complex in Jamnagar has also been annouced. It will consist of four giga factories for manufacturing solar photovoltaic modules, energy storage batteries, fuel cells, and electrolyser. Over the next three years, RIL will invest Rs 600 billion in these initiatives. It will also invest another Rs 150 billion to provide infrastructure and utilities for manufacturing ancillary material and equipment for supporting these giga factories.

Gujarat is also emerging as a RE manufacturing hub. Along with RIL capacity, Adani Solar – India’s largest solar cell and module manufacturer is increasing its manufacturing capacity from 1.5 GW to 3.5 GW. Other companies such as Surat-based Goldi Power are also increasing their capacities.

As a special offering, Genesis Ray Energy a GIS-based energy data and analytics has announced a free “limited period” subscription of its GIS-based tool to study and map energy assets across Gujarat. To be sure, its data tool called GenRay EXPLORERTM that captures the entire spectrum of energy assets including coal, wind and solar projects as well as gas pipelines will be available for free viewing on Genesis Ray’s website, www.genesisray.com.

This will enable the viewing, scanning and assessment of these state assets through a desktop survey. On the tool, all energy assets are geotagged on GIS maps, giving exact location of the sites. For instance, clicking on a wind turbine, key details including capacity of turbine, model number, hub height, date of commissioning, owner of the turbine, details of the turbine manufacturer can be analyzed. In general, all the information such as project, technical, ownership and location specific details of the energy assets can be easily fetched and the same can be analyzed effectively with the help of several widgets on the tool. Besides, data in the tool can be retrieved in various forms to help in analysis. For example, high temporal and spatial resolution maps and 3 dimensional views can be retrieved from the tool. One can also draw charts and info-graphs for prescribed fields for various studies and comparisons.

The Site Suitability tool enables desktop survey of sites on key parameters such as land use, soil bearing capacity, distance from transmission lines, infrastructure connectivity, topographical features of site (such as slope), natural hazard susceptibility, as well as exclusion zoning details for any given location. Another module – Resource Module – gauges resource potential of a wind or solar site and draw probabilistic generation profile is also on cards. The two layers are proving to be a great value-add for energy sector professionals.